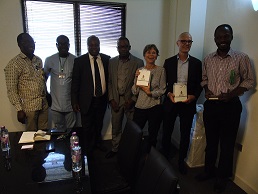 In order to strengthen the collaboration between The Brew-Hammond Energy Centre and its partners in Norway, the director of The Centre had a meeting with the Norwegian ambassador to Ghana, Gunnar Andreas Holm.

Over the meeting, the two discussed the developments of the ongoing project dubbed “Upgrading Education and Research Capacity in Renewable Energy Technologies – Energy and Petroleum (UPERCRETs – EnPe)” which is funded by the Norwegian Agency for Development Cooperation (NORAD) throughout its four-year run.

The UPERCRETs project was initiated to aid in the development of the capacity of KNUST staff to be able to better sustain the current master's program in Renewable Energy technologies which is hosted by the Department of Mechanical Engineering.

Some of the highlights of their discussion were as follows:

In conclusion, it was noted that the project has brought significant improvement in the field of promoting and upgrading education and research capacity in Renewable Energy Technologies.

The ambassador then visited some of the Norwegian sponsored project sites on the university campus and further discussed the progress of the projects as well as further collaborative areas.